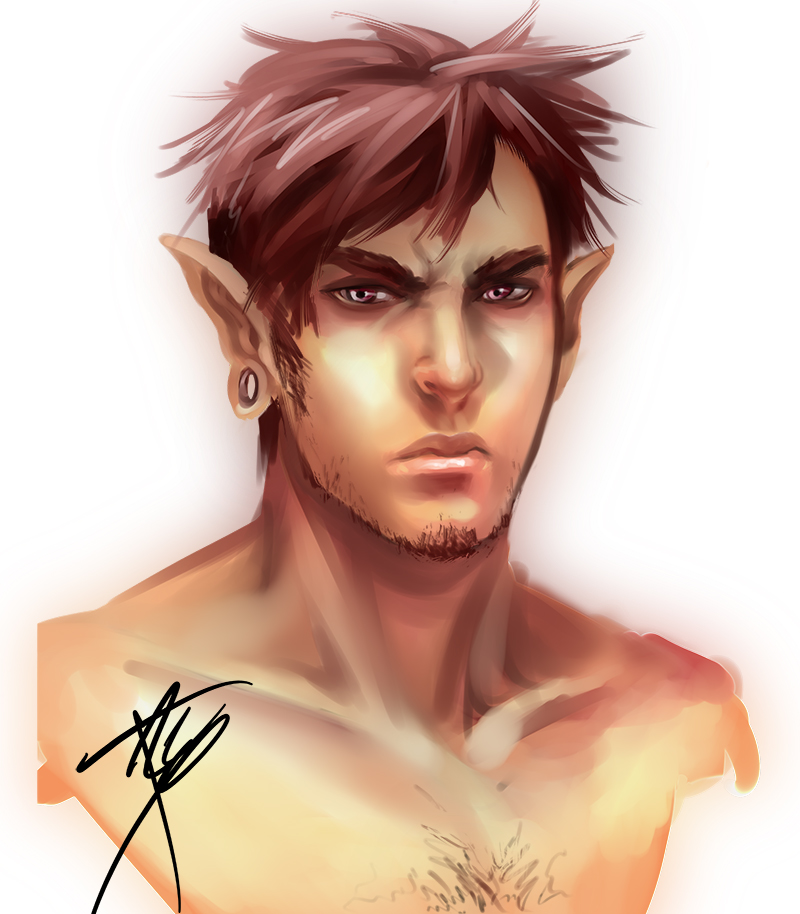 A rather stocky looking elf with coppery colored hair and watchful amber eyes. He often wears a thick green tunic and roughed leather trousers. He normally has a bow slung across his back, it's polished wood well taken care of. He has something like a utility belt around his hips where he keeps various clippers, knives, hoof picks, and a lasso tied to the opposing end of the pockets. He has a hunting knife strapped firmly to his leg while he wears thick hide gloves to protect his hands from rough ropes.

He wears beaten in traveler boots and has an earring in each of his long ears, his frowned lips normally quick to turn upwards when a joke is made or if he feels the urge to hum. His solid jaw and stubble chin give him a rather rougher look than he truly is but beneath his grouchy first impression is a smiling ball of redhaired sunshine.

-A recurve bow he bought off a local hunter and often practices with. It is well taken care of, the smooth wood polished with few nicks and scrapes along its body. The black handle is well worn down though and the left side is nicked.

- A Utility Belt that he holds his horse tools in. It is a worn brown leather, and have deep pockets with tied flaps. Inside there is a mix of grain, foot picks, a curry comb, a small utility knife, flint and steel, a whetstone and various rags stuffed into the pockets. On the opposite side of the pockets there is a rope tied to his hip and a small hammer.

- A Pair of worn trousers

- A Pair of thick leather gloves that he wears near constantly

-A Hunting Knife he has tied firmly to his thigh. He tries to keep it sharp and ready as he often uses this as a last ditch defense but more than often he just uses it to cut a horse free or make marks in the trees so he knows his way around.

-A Mule he fondly calls 'Molly'. Her coat is coarse and grey, while her long ears and her wide brown eyes curiously watching. Despite being stubborn, she is generally friendly and will readily try her best to keep up with the bigger horses though she is easier to spook.