Read the rules on character creation and then make your character here.
Post Reply
1 post • Page 1 of 1 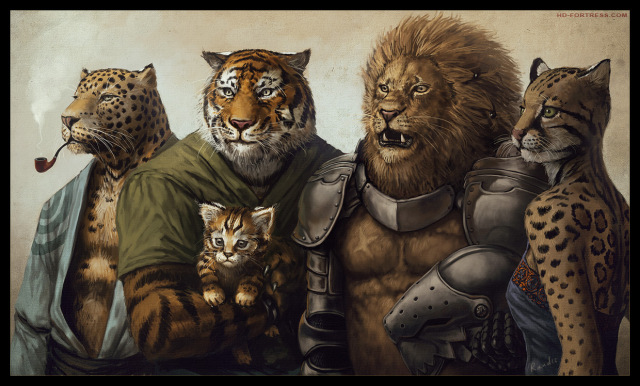 Description:
Kinasa is a tiger man, to put it bluntly. He is tall, about 6'6, and weighs nearly 400lbs. He is heavily muscled, though he covers that up with a green half cloak that he almost never removes. He wears a set of steel chain bracelets on his wrists, which he only removes when he intends to use magic. Steel removes Kinasa's ability to focus on his nature magic.
Kinasa has no tail, nor do any of his comrades.
He wears a pair of linen shorts, which are comprised of a wrap held in place by pins. over these, he wears a belt with several pouches hanging from it.
For ritual or celebratory purposes, Kinasa paints himself in colorful paints, which induce a psychedelic trance in him. He uses this experience to explore his magical understanding.

Possessions:
Kinasa owns very little, and the same is true for the other members of the company. They travel light, bringing only what they will need to survive and maintain their equipment.
However one of Kinasa's only possessions is a considerable library (in the form of a trunk filled to the brim with tomes containing secret knowledge).
He also owns a set of armor, though he rarely wears it, as well as a few trusty weapons. The armor is a thick leather, and is made up of a wide leather-studded belt, belted-sleeves, and legwraps. His weapons are a far eastern Yumi bow, a dagger, and his sharp claws.

Powers or Strengths:
Kinasa is a mage, though it was not seen in him until after he was cursed. The Company guesses that Kinasa's magical ability was set on by it. However his style of magic is unique, and terrifying to behold. He falls into a deep fury, allowing himself to tap into the primal nature of his spirit. He becomes a wild beast, growing stronger and faster by the second. This is because his magical nature is energy-giving. For this reason, he can heal or rejuvenate his allies when they are hurt or exhausted. He also possesses knowledge of a weak barrier spell. The barrier uses raw magical energy to protect the caster. Kinasa's barrier is strong enough to deflect projectiles, but it is no defense against melee weapons or high level spells.
Steel interrupts Kinasa's ability to focus on magic. To compensate, Kinasa draws magical energy to his skin constantly, so that it is as natural as breathing, and contact with steel will not make him lose his weak second line of protection.
Kinasa is a remarkable shot with a yumi bow. He uses it to hunt, finding the elegant weapon to be both freeing and peaceful. He never has the mental presence to use the weapon in combat, however.

Weaknesses and Flaws:
Kinasa's personal relationship with his inner primal being makes it harder for him to recognize the barrier between his two selves. He sometimes loses himself in his bestial side, and unleashes havoc on those around him. In these moments, he relies on Kuna, with his martial arts mastery, to bring him down. However when Kinasa becomes unruly, he requires the entire team to be brought down. For this reason, he has chosen to exile himself from human society. His fellows frequently interact with humans, but he chooses to shun them, and refuses to set foot in their cities. He has taken an oath of silence against humans as well, and the others of the Company must do the talking in Kinasa's place.

History:
Kinasa is the result of countless black magic rituals performed on a helpless human by a Heyawani-Teule mage. The rituals left him scarred and twisted, as he took on the shape of a wild beast. His human nature all but left him as his primal instinct drove him to escape from his binds, for he felt such a calling from the wild in his heart.

Kinasa was not alone in this hell, however. With him were six others; escaped slaves from Marn with bounties on their heads. The seven fled for years, with two of them being killed, leaving only five. Then, they were captured and held prisoner by a Heyawani-Teule exile named Tefudu. Tefudu subjugated them to torture and accursed rituals, leaving many of their spirits broken. One of them died during these rituals.
After nearly seven months, the remaining four escaped: Kinasa, Kiti, Kuna, and Kafra. All of them had been twisted into hybrid beings of cats and men. Kinasa was paired with a tiger, Kiti with an ocelot, Kuna with a leopard, and Kafra with a lion. When they first escaped, they behaved as wild beasts, and lived in a pack. They hunted and fought for their survival. But worst of all, Kinasa found that his blood had been tainted with the touch of magic.
After years of coming to terms with his new power (and also his own humanity), Kinasa vowed to use his powers to fight for justice, and the Seven Sons Mercenary Company was born. Kafra became the leader, as his mind was much more sound in battle than was Kinasa's. Kinasa became the right hand man, as his mind was valued greatly when in a calm state. Then there were Kuna and Kiti. Kuna was a wise old leopard man, but his martial arts mastery spared them from many brushes with death. Kiti was swift, and had grown up as a thief in Marn. Her skills had proven valuable countless times.

Today Kinasa and his comrades travel between Marn and Shim picking up contracts.
- - -
I know this is a really weird 'character', but the other members of the Company are mostly there to support Kinasa in story alone. Any players who wish to battle may use a large group of NPCs to make up for the disadvantage, if they wish. Or, they could simply challenge any character in the Company to single combat. There will be no ganging up whatsoever.
Top
Post Reply
1 post • Page 1 of 1