Characters who have been approved and are currently playing.
Locked
2 posts • Page 1 of 1

Physical Description:
Human: In his human form, Manuel stands at a height of 5'8" and a weight of 58 kilograms. He has a slim but fit build, with dark brown skin and black eyes. Manuel has short curly black hair and maintained a clean appearance at all times. He usually dons a pair of glasses.

Snake: In his snake form, Manuel is 2.5 metres long with glossy olive-brown scales, he weighs in at 1.2 kilograms. 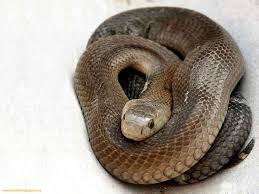 Half-Snake: Manuel also has an in-between form, a cross of his human and snake form. In this form he maintains his human structure and stance, but short fangs emerge from his mouth, he can unhinge his jaws (this helps conceal his fangs), he produces venom and his skin becomes covered with the scale-like pattern of his snake form.

Venom: Manuel's venom is quite powerful, such that if you are bitten by him in his snake or midway form, and do not receive proper treatment, it is likely you may die in the next 9 hours

Arboreal Nature: Manuel learnt to climb at a very young age, in both his shifter and human forms. He is quite at home among trees and other tall structures.

Skilled with Knives and Bows: As a hunter Manuel is quite comfortable with a knife, or a bow and arrows. While he isn't extremely good he can hold his own against a single opponent.

Learned: From being tutored endlessly by his father, he is quite knowledgeable on most topics

Quick Wits: Manuel is naturally quick witted, and this is sharpened considerably by his interest in books. It takes a lot to trick him.

Poor Eyesight: Without his glasses, Manuel's eyesight becomes very blurred and he cannot make out facial features. Unless the person is extremely close.

Anger issues: If you know the right buttons to push, Manuel can flare up rather quickly.

Lack of regard for judicial system: Because of the way his people were pushed out of their city, and lack of guard actions taken to stop it, Manuel has a general disregard for rules and regulations, if breaking then won't negatively affect him.

Discomfort: Having experienced racism in the past, he is slightly uncomfortable around other races.

Personality:
Manuel is described has having a very random personality, changing the way he acts to fit the situation at hand.
He enjoys having a good laugh, and can often be seen joking with friends. But when bored or offended he goes stoic.
An analytical lad, he enjoys shows of magic and is secretly working towards procuring some magic of his own. He views the anti-magic laws of Marn as backwards and unneeded.
If faced with a conflict, Manuel would prefer to talk his way out of it rather than fight his way out. If you attack him however, he won't want kill you, rather he would disable you in some way.
He has an affinity for shiny rocks, hence the name gem was given to him by his family.
In his snake form, he acts pretty much like a normal Mamba, the only difference being that he restrains himself from biting without reason.
He is an avid bookworm, and can drop everything to read a book he hasn't come across before.

Family/Npc:
Gad Aknin (Father): A large Black Mamba shifter, he is the column that holds the family up. Stern but fair, he only wants the best for his children, and for his lineage to continue through the ages. He has some temper issues, and doesn't hesitate to discipline his children when needed. Gad is well known and revered scholar [60 years old]

Susan Aknin (Mother): A slim and calm Fennac Fox shifter, Susan can be described as the foundation on which Gad is set. She adores Gad and calms him when needed, but can be just as stern if she feels the situation calls for it. [54 years old]

Darla Aknin (Eldest Sister): A kind and motherly figure, Darla is a chubby fox shifter who can always be found with a smile on her face. Caring and doting, she is every bit a mother as Susan, if not more so. [28 years old]

Sie Aknin (Middle Sister): Calm and collected are words that fit Sie perfectly, a stoic mamba shifter, she can rarely be seen cracking a smile unless she is in the company of close friends or her siblings. [26 years old]

Arya Aknin (Immediate Senior): A feisty fox shifter, Arya is the embodiment of excitement and joy in the family. To find her you need look no farther than the nearest festival, where she would be the centre of attention. She is the most extroverted of all the siblings. [24 years old]

History:
Manuel Aknin was born on 138 PW in the country of Tamazgha, his birth although not expected, was welcomed with open arms by his father Gad, who was glad that he finally had a male heir to call his own. Manuel came into the world as a tiny black mamba, not assuming his human form until he was around the age of five.

During his childhood years, Manuel spent most of his time in his mamba form, slithering around the house and exploring as he pleased. When he reached the age of five and assumed his human form, Gad took it upon himself to teach Manuel about the world that they lived in. He would sit Manuel down each day to teach him something new, and as a result Manuel became imbued with extensive knowledge of different cultures and languages.

Around 121 PW when Manuel was 15, there was a great revolt in their city. One which targeted shifters and any associated with it. The family was betrayed by their neighbours and along with hundreds of other shifters, were taken into custody. The shifters were given a choice, exile or death. Majority chose exile. They were given five hours to pack up and leave the city, forced to find somewhere new to go.

Kicked out of the city that had housed them for so long, majority of shifters decided to head towards Zhaltev, where they knew they would find refuge. But a select few disagreed saying that the hierarchy system was strict and brutal. That they would rather try their luck in different regions of the empire, see what they could find.

Fifty in all the band of shifters spent many perilous days, walking across the land towards a port where they could carter a ship, some of them died from sickness, others gave up along the way and went feral. By the time they reached the port to Qadis, there were only fifteen shifters left. Undeterred they sailed on and upon reaching Qadis, each shifter and their family went their own way. The Aknins wandered Eyropa for months, before stumbling across Marn.

In Marn the Aknin began to rebuild they displaced lives, Gad becoming a lecturer at the university, and Susan becoming a teacher at the school. Manuel and the girls became hunters, bringing down beasts and selling their flesh and skin for gold. The Aknins currently reside in the residential district of Marn, and don't appear to be leaving anytime soon.
Top

As a new member, we encourage you to be pro-active in finding a thread for your character. Hang out in chat and get to know people, or PM someone who you think might be fun to write with. There are a few places you might want to check out to help you with the process:

As always, feel free to PM myself or any other moderator if you have any questions or concerns. Have fun!
Top
Locked
2 posts • Page 1 of 1